In this article, I'll look closely at the 8 best nootropics for traumatic brain injury (TBI). I'll also cover the potential risks and side effects you may run into and the benefits you can expect.

Traumatic Brain Injury (TBI) is a serious and potentially life-altering condition. It can cause physical, cognitive, and psychological impairments that can have long-term repercussions.

Nootropics have been gaining popularity as a tool for managing symptoms of TBI, and they are gaining more acceptance in the medical community. Let's look at what Science has to say about nootropics for TBI.

The best nootropics for TBI (Traumatic Brain Injury), according to scientific evidence, are:

The 7 nootropic ingredients in Nooceptin are:

CDP-Choline is a form of Choline that boosts memory through increased neural plasticity and acetylcholine (ACh) in the brain. This is essential for TBI patients who may have suffered neurodegeneration in this brain area.

One study showed that citicoline is an effective and safe treatment for traumatic brain injury patients, improving recovery time and long-term prognosis [2]Secades, Julio J. “Role of Citicoline in the Management of Traumatic Brain Injury.” Pharmaceuticals (Basel, Switzerland) vol. 14,5 410. 26 Apr. 2021, doi:10.3390/ph14050410. Therefore, it could be used as an effective management strategy for TBIs. 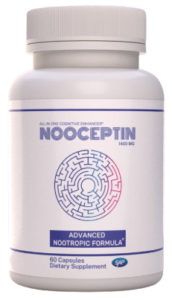 Nooceptin contains 7 clinical-proven nootropic ingredients that all work together to create a powerful cognitive-enhancing blend. It is a great option for TBI patients as it increases neural plasticity and acetylcholine in the brain, reducing recovery time and the long-term prognosis of TBIs.

Creatine is a naturally-occurring nootropic renowned for its cognitive-enhancing properties.

Held within your liver, kidneys, and pancreas as an amino acid molecule known scientifically as 'non-essential', it quickly gets to work once entering the brain.

Traumatic brain injuries have been linked to decreased metabolic markers, such as the ATP/ADP ratio. The underlying cause may be attributed to the depletion of creatine caused by these head trauma events [3]George, Elijah O et al. “Longitudinal and prognostic evaluation of mild traumatic brain injury: A 1H-magnetic resonance spectroscopy study.” Journal of neurotrauma vol. 31,11 (2014): 1018-28. … Learn more.

Therefore, creatine may act as an effective TBI treatment since it can replenish the levels of ATP in the brain and improve recovery time and long-term prognosis.

Creatine is a naturally-occurring nootropic that provides brain cells with invaluable energy. It increases the ATP/ADP ratio in the brain, which can help boost recovery time and the long-term prognosis of TBI patients. While creatine may be effective in managing TBI symptoms, it is not ideal for people with decreased kidney function.

Particularly influential is DHA's role in augmenting phospholipid content within the cells. Higher quantities of phosphatidylserine (PS) and phosphatidylethanolamine are catalyzed to promote lifelong neurological development.

DHA is an omega-3 fatty acid that offers numerous neurological benefits. It helps protect against harmful cell death, increases phospholipid content in brain cells, suppresses nitric oxide production, and reduces systemic inflammation. While it is cheap and widely available, getting a quality DHA product is important to ensure the best results.

Resveratrol, a polyphenol stilbenoid found in red wine and other plants, may be one of the best potential treatments for traumatic brain injuries.

Although direct studies haven't been conducted with TBI victims yet, it has demonstrated positive effects due to its ability to increase Brain-derived Neurotrophic Factor (BDNF).

BDNF is a protein that plays an essential role in neuronal development and plasticity. The increased production of BDNF is a protective factor to support neurons against damage caused by trauma and concussion [7]Korley, Frederick K et al. “Circulating Brain-Derived Neurotrophic Factor Has Diagnostic and Prognostic Value in Traumatic Brain Injury.” Journal of neurotrauma vol. 33,2 (2016): 215-25. … Learn more.

Resveratrol is a polyphenol stilbenoid found in red wine and other plants that may be one of the best potential treatments for traumatic brain injuries.

Lithium Orotate is a nutritional supplement form of lithium used in microdoses, much like zinc or selenium. It is an orotic acid and lithium salt, available as the monohydrate LiC5H3N2O4·H2O.

Lithium Orotate is an over-the-counter nutraceutical that consists of orotic acid (a compound produced naturally in the body) and lithium (an essential trace mineral). It has been used for decades to treat mental health issues such as depression, bipolar disorder, and anxiety [9]Pacholko, Anthony G, and Lane K Bekar. “Lithium orotate: A superior option for lithium therapy?.” Brain and behavior vol. 11,8 (2021): e2262. doi:10.1002/brb3.2262.

In recent years, research has suggested that lithium may benefit those suffering from traumatic brain injury (TBI). Studies have shown that it can help reduce inflammation and oxidative stress in the brain following a TBI [10]Leeds, Peter R et al. “A new avenue for lithium: intervention in traumatic brain injury.” ACS chemical neuroscience vol. 5,6 (2014): 422-33. doi:10.1021/cn500040g.

Lithium Orotate is a nutritional supplement form of lithium used in microdoses, much like zinc or selenium. It is an orotic acid and lithium salt, available as the monohydrate LiC5H3N2O4·H2O.

It can help reduce inflammation and oxidative stress in the brain following a TBI and cross the Blood Brain Barrier more effectively than other forms of lithium. It is a non-prescription nutraceutical and should be used under medical supervision if prolonged usage is required.

Considered a powerful antioxidant, N-Acetyl L-Cysteine (NAC) is an altered form of the amino acid L-cysteine which aids in restoring our vital defense - glutathione (GSH).

Traumatic Brain Injury (TBI) inflicts a myriad of damages to the brain, from glutamate toxicity and free-radical cell injury to mitochondrial dysfunction and even stroke. In extreme cases, cells may undergo apoptosis - death as an adaptive response against these traumas.

One randomized double-blind, placebo-controlled study conducted on active duty service members at a forward-deployed field hospital in Iraq, looked at the efficacy of NAC supplementation in reducing TBI-related symptoms.

Service personnel who were affected by extreme ordnance-related blasts and stated criteria for traumatic brain injury (TBI) were randomly assigned to receive either a placebo or NAC.

After the 7-day duration of the trial, success was measured in absence of TBI symptoms such as confusion and disorientation. Results showed that NAC was significantly superior to the placebo in reducing symptoms of TBI, with no adverse side-effects [12]Hoffer, Michael E et al. “Amelioration of acute sequelae of blast induced mild traumatic brain injury by N-acetyl cysteine: a double-blind, placebo controlled study.” PloS one vol. 8,1 (2013): … Learn more.

N-Acetyl L-Cysteine (NAC) is an altered form of the amino acid L-cysteine which aids in restoring our vital defense - glutathione (GSH). It is considered a powerful antioxidant and has been found to be effective at reducing symptoms of TBI in a double-blind study with no adverse side effects.

Pine Bark Extract has been shown to be an impressive ally in the fight against inflammation and oxidative stress. Proven one of the strongest antioxidants known, this natural supplement could play a key role in treating conditions associated with traumatic brain injury [13]Cho, K J et al. “Effect of bioflavonoids extracted from the bark of Pinus maritima on proinflammatory cytokine interleukin-1 production in lipopolysaccharide-stimulated RAW 264.7.” Toxicology and … Learn more.

Additionally, it holds the potential to reverse symptoms caused by restricted blood flow after TBI due to its capacity for increasing cerebral blood flow.

This could be thanks to its modulation capabilities for both AMPA and NMDA receptors which are often negatively impacted post-trauma [16]Ahmed, Ahmed H, and Robert E Oswald. “Piracetam defines a new binding site for allosteric modulators of alpha-amino-3-hydroxy-5-methyl-4-isoxazole-propionic acid (AMPA) receptors.” Journal of … Learn more.

Piracetam has been found to normalize L-Glutamate levels, increase cerebral blood flow and have modulation capabilities for both AMPA and NMDA receptors which are often negatively impacted post-trauma.

What Are the Best Nootropics for TBI (Traumatic Brain Injury)?

The 8 best nootropics for TBI (Traumatic Brain Injury), according to the scientific literature, are:

My list contains a mix of natural and synthetic nootropics, each containing a unique set of benefits that can help to improve cognitive performance for those with traumatic brain injury.

If you're looking for a powerful synthetic nootropic, Piracetam is your best choice. It has an impressive range of protective benefits for brain cell health and can help boost cerebral circulation through enhanced nitric oxide activity.

For those who prefer natural options, Nooceptin and Omega-3 (DHA) are excellent choices. Nooceptin is a unique blend of natural herbs that can support healthy cognitive performance, while Omega-3's anti-inflammatory properties can help reduce swelling in the brain after a TBI.

You can stack Nooceptin and Omega-3 for maximum benefit or take them separately. Others may prefer to add Creatine or Resveratrol for enhanced brain-boosting benefits.

How to Choose the Right Nootropic Supplement for TBI (Traumatic Brain Injury)?

How you choose the right nootropic supplement for TBI (Traumatic Brain Injury) depends on 3 factors:

The natural nootropics on my list are generally safe and have fewer side effects than synthetic nootropics, but they are not as potent most of the time.

On the other hand, synthetic nootropics are often more potent and have more substantial effects, but they can be more expensive and have more side effects.

If you’re on a budget, I suggest starting with natural blends like Nooceptin. If these don't provide enough benefit, consider investing in stronger options such as Piracetam.

You can always use Nooceptin as a foundation and add stronger nootropics.

What Are the Benefits of Nootropics for TBI (Traumatic Brain Injury)?

Nootropics can benefit those suffering from TBI (Traumatic Brain Injury) in different ways.

Nootropics can increase communication between neurons and improve the functioning of neurotransmitters, which can help speed up recovery from TBI.

The antioxidants present in nootropics can also protect against free radical damage, reducing inflammation and oxidative stress. This can help to minimize cell death caused by trauma or lack of oxygen to the brain.

Overview of the benefits of nootropics for TBI (Traumatic Brain Injury):

• Enhances the functioning of neurotransmitters.

Using a combination of nootropics, TBI patients can improve their cognitive performance while reducing the risk of further neuronal damage. It's important to note that nootropics cannot reverse existing damage or cure TBI, but they can help to improve symptoms and reduce the risk of further injury.

Nootropics should be used as part of a larger treatment plan prescribed by a doctor. Always consult with your healthcare provider before adding any supplement to your routine.

What Are the Side Effects of Nootropics for TBI (Traumatic Brain Injury)?

In general, nootropics are considered safe and their side effects tend to be mild. However, it’s important to note that some synthetic nootropics can have more significant side effects than natural ones.

Common side effects of nootropics for TBI (Traumatic Brain Injury) include:

It’s also important to note that nootropics can interfere with other medications, so it’s best to talk to your doctor before adding any supplement to your routine.

Depending on which route you go down (natural or synthetic nootropics) and the severity of your TBI, you may experience different levels of improvement.

For best results, combine or stack your nootropic supplement with a balanced diet, regular exercise, and plenty of rest. This will ensure you get all the nutrients and stimulation needed to speed up recovery from TBI and improve cognitive performance.

If you’re considering adding nootropics to your treatment plan for TBI, it’s important to discuss it with your doctor first. They will be able to recommend the best course of treatment for you.

So what do we know about nootropics and TBI?

We also know that there is a difference between natural and synthetic nootropics, with natural nootropics being generally less risky than synthetic ones.