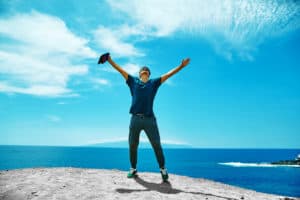 In this article I’ll be reviewing 11 nootropics that will help make you more happy overall. These nootropics are non-habit forming and generally safe to consume.

You may already be familiar with some or many of these nootropics – however, it helps to have a comprehensive list of suggestions so that you know what to avoid.

I’ll be listing the pros and cons for each nootropic, along with any warnings that might need. So without further ado let’s take a closer look at 11 nootropics that will help enhance your mood.

This nootropic is also known as Brahmi, and it is commonly used in Ayurveda treatments. It increases your memory, attention span, and encourages learning. Bacopa also has the ability to diminish physical and mental fatigue. It’s a nutrient found throughout most parts of the world – but it’s most popular in India.

Bacopa Monnieri Warnings:
It may cause dizziness & headache. Long term use can also impair your central nervous system.

Tyrosine is an amino acid that is synthesized in your body. It’s one of the precursors to dopamine, epinephrine, and norepinephrine, which are neurotransmitters that help to improve your mood.

Tyrosine Benefits:
It improves your mood, physical energy, and focus. It also reduces the stress hormone cortisol when taken at optimal dosages.

Tyrosine Warnings:
Don’t confuse this amino acid with vitamin B-6 – it’s very different. Tyrosine is an essential amino acid and it has a limited supply that is available to us all.

Also, make sure you’re using a good quality supplement out of high repute to ensure that it’s free from any negative effects.

L-theanine is a natural amino acid which can be found in certain fruits (and green tea). The substance works by relaxing blood vessels, reducing stress and increasing overall cognitive performance and sense of well-being.

L-Theanine Benefits:
Improves mental focus, mood and relaxation. Reduces feelings of stress, anxiety & depression. When taken prior to working out it increases endurance as well.

L-Theanine Warnings:
It’s generally safe for most individuals to use. However, it’s best to avoid using this substance if you have any personal or family history with anxiety disorders.

There have also been some reports of side effects from using this nootropic including nausea – although this is very rare.

Lithium Orotate is a supplement derived from lithium – which is a trace element used to help with mental disorders and increasing your sense of well-being.

Lithium Orotate Warnings:
It’s generally safe for most individuals to use – but make sure that you’re using a reputable brand that can confirm that it’s free from any impurities or other substances.

Omega-3 fatty acids are mostly found in fish oil and they are known to improve your overall sense of well-being. This essential nutrient is derived from the Omega family of fats and it’s commonly used as a dietary supplement.

Some research has shown that Omega-3 fatty acids may be helpful when it comes to improving your mood. These fats may help to mitigate inflammation in the body as well.

Omega-3 Fatty Acids Benefits:
Improves mood and mental health. It helps to reduce anxiety and depression in some individuals. Helps to improve your mood, & protects the brain from oxidation damage.

Omega-3 Fatty Acids Warnings:
It’s generally safe for most individuals – however it should be taken at lower doses or on a cycle with other nootropics for best results.

Dimethylaminoethanol is an amino acid that supplies your brain with acetylcholine. It is also a precursor to dopamine and epinephrine – which are both neurotransmitters that promote feelings of happiness.

DMAE Warnings:
It should be taken only at low dosages or close to a cycle with other nootropics. It can cause nausea & headaches when it’s taken in higher doses.

Phenibut is an amino acid which was first developed in the former Soviet Union. This compound is used to reduce anxiety & improve your mood. In some countries, it’s even used for the treatment of depression.

Phenibut Benefits:
It improves your mood, anxiety levels and libido. It may also help you get better sleep quality & reduce feelings of stress as well.

Phenibut Warnings:
It should be taken only at low doses. Phenibut is notorious for having bad withdrawal symptoms, so you should take it in cyclic or micro-dosing patterns.

B Vitamins are essential for maintaining your mental health. They help to support the neurological pathways in your body that allow you to build a sense of well-being.

Vitamin B12 Benefits:
It may help to reduce feelings of anxiety and depression and improve your memory & cognitive functioning. Also, it may help to boost your energy levels during the day.

Vitamin B12 Warnings:
It’s generally safe for most individuals to use. – but if you have high levels of homocysteine you may want to avoid supplementing with this nutrient.

Beta-alanine is known as the “tweak” nutrient due to its ability to act as a catalyst for other neurotransmitters in your body. For example, it may help to promote boosted levels of dopamine and serotonin.

Beta-alanine Benefits:
It increases your energy levels and focus during the day. It also supports cognitive function by allowing you to think more clearly & stave off dementia.

Beta-alanine Warnings:
It’s generally safe, but you should be aware that it can cause headaches and a feeling of tightness in the chest.

5-HTP is a natural chemical that’s found in your body. It’s also a precursor for serotonin, which is one of the feel-good neurotransmitters in your brain.

5-HTP Benefits:
It may help reduce depression and anxiety symptoms while promoting a relaxed feeling. It can also improve your sleep quality and overall mood.

5-HTP Warnings:
It should only be taken with caution as it can also cause nausea, headaches and diarrhea/loose stools.

Acetyl-L-Carnitine is considered one of the most important supplements for promoting brain health and cognitive function. It may help to improve your memory, mood, energy levels and overall brain power.

Acetyl-L-Carnitine Warnings:
It’s generally considered safe to take, but it may cause an upset stomach and/or diarrhea in some people due to certain ingredients. Also, it may increase your blood pressure, heart rate and cause anxiety in some people as well.

If you’re looking for Nootropics to help improve your happiness, mood and just overall sense of well-being, you should definitely consider looking more into these 11 Nootropics. They’re all great, safe and effective when taken properly.

However, it’s important to remember that these are just small pieces of the puzzle.

Oftentimes, we think that Nootropics are going to be the solution our problems and make us happy.

However, this isn’t always the case.

Yes, these will help improve your mood (especially if you’re feeling depressed), but it doesn’t mean you’re suddenly going to be happy after taking them, so keep that mind.