Afobazole (or Fabomotizole) is an anxiolytic drug from the benzodiazepine family. It was designed as a potential replacement for Librium and Valium, to produce less sedation and muscle relaxant effects while retaining anti-anxiety properties.

Fabomotizole is prescribed for mild to moderate anxiety disorders in Russia, but has not been approved by the FDA for use in the United States yet due to concerns with its sedative side effects.

In this article, we aim to give you all the information you need about Fabomotizole: what it does, how it works, what it's used for, possible benefits and side effects of taking Afobazole or Fabomotizole tablets.

Table of Contents show
What is Afobazole?
What Is Afobazole Used For?
Afobazole vs. Valium and Other Benzodiazepines
Benefits of Afobazole
Side Effects: What Are the Real Risks?
Possible Interactions
Where to Buy?
The Bottom Line: Afobazole for Anxiety Disorders

Afobazole (brand name Fabomotizole) is a drug that's used to treat anxiety and other related conditions like PTSD in Russia.

It's not available in the United States yet due to safety concerns, but it's still considered a promising anti-anxiety drug with a lot of potential. It works similarly to traditional benzodiazepines, as well as Z drugs like Ambien and Lunesta, which are all highly effective at treating anxiety disorders.

However, unlike older benzos such as Valium or Xanax that can be sedating and cause motor impairment, Afobazole does not produce these side effects due to its unique structure.

What Is Afobazole Used For?

Afobazole is an anxiolytic drug used to treat anxiety disorders and other related conditions. It's prescribed for nervousness, fearfulness, and insomnia.

It's widely used in Russia, but hasn't been approved by the FDA yet due to concerns with its sedative effects and possible side effects. It's not recommended for daily use, as it takes several weeks to bond with the body and produces long-lasting effects rather than short-term ones.

Afobazole vs. Valium and Other Benzodiazepines

One thing that differentiates Afobazole from other benzos is the fact that it does not cause cognitive side effects like memory impairment or motor impairment.

This is makes it very effective for treating anxiety disorders without making you feel sedated, tired, and incapable of working or thinking clearly.

This is a great benefit for people who want their anxiety symptoms under control without dulling their senses, making them unable to work effectively or perform daily tasks. It also improves your mood and increases your energy levels and makes you feel more balanced overall than other benzos do, even after just a few days of taking it.

As mentioned above, Afobazole is considered a highly effective drug for treating anxiety disorders.

It's very similar to benzodiazepines like Valium and Xanax in terms of how it works to calm the nervous system down, but it doesn't carry any sedating effects and boosts the action of GABA, which is essential for promoting relaxation in the body. 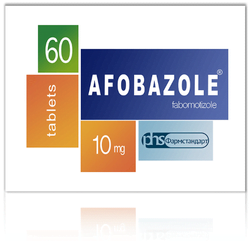 One reason why it works so well for anxiety disorders is that it boosts the action of GABA in the brain. GABA is the main neurotransmitter that facilitates the action of other chemicals in the brain, and supplementing it with a benzodiazepine like Afobazole can help calm down the nervous system and promote relaxation.

However, this is only one of the many ways it's effective at treating anxiety disorders. It also increases levels of nitric oxide, a compound responsible for improving vascular function in the body that helps to regulate blood pressure and reduce heart rate.

It also reduces inflammation in the body by reducing stress hormones like cortisol. This is another mechanism by which it promotes relaxation and combats anxiety.

Side Effects: What Are the Real Risks?

Although Afobazole appears to be a highly effective drug for treating anxiety disorders, there are some risks associated with taking it. Due to its unique structure, Afobazole differs from other benzodiazepines and can cause unique side effects that are not seen with traditional benzos like Valium.

For instance, it doesn't impair motor control or cognitive functions, but it does cause sedation in some people at higher doses. It also causes nausea and vomiting for about half the amount of people who take the medication due to its anti-nausea effects. Afobazole can also cause more calories to be burned than usual because of its effects on metabolism.

It's important to remember that Afobazole is not a drug you should take daily, and it takes many weeks for the body to get used to it and bond with it fully. You're also recommended not to exceed the recommended daily dose, as this can lead to overdose symptoms such as vomiting, headache, fatigue, dizziness, diarrhea, and slowed breathing.

These side effects are usually very mild and short-lived at first but could become noticeable after longer term usage. It is safe for most people who take Afobazole as long as they stick within their prescribed amount and don't exceed it.

Like all medications, Afobazole can cause problems when taken in conjunction with other drugs.

You should speak with your doctor to make sure your current medications don't interfere with Afobazole. In some cases, this drug can cause allergic reactions including swelling of the face or difficulty breathing.

You should also be aware that taking this medication with alcohol or other sedative drugs can amplify these effects and possibly lead to addiction or an overdose.

It's best to avoid these substances while taking Afobazole unless you're under supervision by a doctor who can help monitor your use of these substances and prevent negative interactions from occurring.

Afobazole is a prescription drug that requires a physician's approval and authorization to purchase. If you're interested in buying Afobazole, the best way to do so is to speak with your doctor about it.

They can give you the proper dose and verify whether or not it's right for you. Your doctor may even be able to provide you with Afobazole samples if they have any in stock and you're interested in trying it out prior to completing a full prescription.

It's important to note that Afobazole is not recommended for milder forms of anxiety or pain like that of back pain or headache, since it can cause more severe side effects such as sedation, fatigue, and vomiting at higher doses.

On the other hand, this drug is recommended for mild to moderate symptoms of anxiety and mood disorders such as PTSD. It works by balancing out the levels of serotonin and testosterone in the brain, which has been shown to help relieve anxiety and depression.

Overall, the benefits of Afobazole outweigh its negative side effects. It's an important medication that can help treat anxiety disorders, especially PTSD.

If you've struggled with this condition for a long time or have had trouble finding a solution that works for you personally, it's worth discussing Afobazole with your doctor and seeing how this medication effects your symptoms.