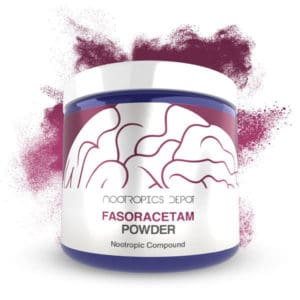 Fasoracetam is a cognitive enhancer. It belongs to the racetam family and helps in preventing memory loss, reduce symptoms of depression and gives a nice clean brain boost / alertness.

So like it’s always the case I did some research on new potential Nootropics last week. I was trying to find a new potent compound to add to my stack.

I came across a relatively new Nootropic called; Fasoracetam which I will take a closer look at in this article.

As I’m writing this I have ordered 5 grams of Fasoracetam and will test it out right when I get my package.

I will keep this article updated and share my own experience with Fasoracetam, what it does for me, what benefits/side effects I experienced and so on (you know the drill).

Here’s what we will be covering today:

So without further ado, let’s just get straight into it.

As briefly mentioned in the beginning, Fasoracetam is a powerful cognitive enhancer that belongs to the racetam family.

For the geeks out there, like myself, you can also find Fasoracetam under the more technical names such as; NS-105, LAM-105, and NFC-1.

To give you guys some quick background information Fasoracetam was first made back in the 90’s.

The idea behind this Nootropic was to create a compound that would help treat dementia.

The company behind Fasoracetam spent over $150 million developing this Nootropic, allegedly, which later failed miserably.

From the information I could find, Fasoracetam failed the phase 3 clinical trials back in the day due to lack of efficacy.

Fasoracetam was pretty much a ‘forgotten’ Nootropic until 2012 where the interest was revived.

I tried to find some more information about how far in the process they are and found this study where it states that Fasoracetam is currently in phase 2 clinical trials.

If you’re familiar with other racetams, you’d know that the exact mechanism of action is not fully understood.

That being said we do have some information available (and a few studies) where scientists hypothesize, and test, how it works.

From one study I could find here’s how Fasoracetam works:

If you’re curious to know more about these potential benefits I have listed above you can find the study here that goes more into details about the mechanism of action.

What Are The Benefits?

Before I talk about the potential benefits of Fasoracetam it’s worth noting that we don’t really have any conclusive evidence available when it comes to the benefits.

Most of the research and experiments are done on rats.

That being said, we do know that it is a relatively safe and non-toxic Nootropic.

So keep in mind that the benefits and side-effects I will talk about here are purely based on anecdotes and my own experience (once I get my Fasoracetam).

From the information, and anecdotes, available online here are the benefits I could find:

Going through one of the studies I linked to in the beginning an interesting thing I noticed is that fasoracetam was reported to prevent memory loss.

Although only tested in rats, scientists noticed that it reduced amnesia which would make sense since it increases acetylcholine and reduces GABA-B activation.

Acetylcholine is an ester of choline that serves as a transmitter of nerve impulses.

It May Help With Depression

High levels of GABA in the brain have been linked with specific mental disorders.

The two most common disorders are;

In this animal study we can see that fasoracetam helped in reducing symptoms experienced when dealing with depression and anxiety.

The experiment was a ‘shuttle-box test’ which basically is a ‘learned helplessness test’.

What the scientists discovered administrating Fasoracetam repeatedly was that it reversed the failure to escape in the shuttle-box test.

The rats in this experiment were previously exposed to an inescapable footshock which makes the outcome that more interesting.

Here’s what the scientists concluded from the experiment:

“These findings suggest that NS-105, which lacks an effect on monoaminergic systems, has potent antidepressant activity, which may involve up-regulation of GABA(B) receptors after repeated administration.”

In terms of cognitive enhancement, creativity and just an overall boost in brain performance, I couldn’t find any conclusive evidence/studies that would support these claims.

However, I did find a lot of personal experiences from people on Reddit which is EXTREMELY fascinating.

A user called; u/xXCsd113Xx3 talks about how Fasoracetam has changed his life. You can read the entire thread here.

Basically what he talks about in the thread is that he’s been experimenting with Fasoracetam.

The positive results he got using it daily prompted him to write the review.

He bought a bottle from Nootropics Depot.

When he started taking Fasoracetam he knew it was something different from the get-go.

He describes how his body started to tingle, words came into process faster.

Most noticable was the effect Fasoracetam had on his anxiety.

His anxiety that constantly was lurking in the background was completely gone or as he says;

“It felt as though I had finally been released from a prison cell.”

Again, if you want to read his entire experience with Fasoracetam click on the link above, it’s an interesting read.

Another Reddit user called; u/SpacePirateIo talks about what he experienced using Fasoracetam and how it has become his new favorite Nootropic.

Here’s what he experienced in his own words:

Does Fasoracetam Have Any Side-Effects?

Like it’s the case with most Nootropics, Fasoracetam has potential side-effects. It’s worth noting that it is a new Nootropic so the data is limited.

That being said most of the negative side-effects people are reporting are;

The side-effects however, seem to be dose depended. An overdose report details how a 27-year old man ingested well over 1000 mg fasoracetam stacked with Phenibut.

The outcome of overdosing was bradycardia which is basically a condition where the heart rate slows down to 60 beats per minute.

In terms of ‘normal use’ of Fasoracetam I couldn’t find anyone reporting any negative side-effects.

In terms of an effective dose, it really comes down to your own personal goals as well as body weight.

If we take the information in the studies I have listed throughout this article we can see that most of the doses used were; 100, 200 and 400mg taken multiple times a day.

From the Reddit threads we can see that most people take anywhere from; 10 to 800 mg.

The dosage depends on if you buy in powder or capsule form. Fasoracetam can also be taken sublingually (under your tongue) in a dose that ranges anywhere from 10 and 20 mg/daily.

Given that there is such a huge difference in the doses it’s hard to make any conclusions about what dose you should take.

I always recommend starting out with a low dose and then gradually work your way up.

Where Can You Buy Fasoracetam?

It’s is a legal racetam which means that you can find it on most websites selling Nootropics.

I personally only buy from NootropicsDepot. I usually receive my packages within 10 business days.

I have ordered from a couple of other Nootropic Vendors in the past but none of them came even close to the guys over at NootropicsDepot.

The only downside to NootropicsDepot is their delivery time which varies a lot (depending on where you live in the World ofc).

If you want to give them a try click here.