Disclaimer: This is not meant to be a substitute for professional help or treatment. If you are struggling with alcohol addiction, please seek help from a qualified healthcare provider.

In this article, I'll take a closer at the 8 best nootropics for alcoholism. I'll also cover the potential risks and side effects you may run into, as well as the benefits you can expect.

Nootropics are most commonly used to improve cognitive function, but they can also help treat other conditions.

For example, some nootropics have shown promise in treating addiction and substance abuse.

Let's take a look at the 8 best nootropics for alcoholism, as well as the potential pros and cons associated with each one and what the science has to say.

The best nootropics for alcoholism, according to scientific evidence, are:

Although Mind Lab Pro is marketed as a "universal nootropic", it may be particularly well-suited for those struggling with alcoholism.

This nootropic is so effective for alcoholism because it targets all of the key areas that are affected by alcohol abuse.

For example, Mind Lab Pro can help to:

Mind Lab Pro contains L-Theanine, an amino acid that can help promote relaxation without drowsiness. In fact, L-Theanine is often used as a natural treatment for anxiety and stress.

It mimics the relaxing effects of alcohol without the negative consequences, such as impaired judgment and motor function.

Mind Lab Pro is one of the best natural nootropics for alcoholism, as it can help to support cognitive function, protect the brain from damage and reduce withdrawal symptoms. That being said, it's not as effective as prescription medications.

Noopept is a nootropic drug that's often used to treat cognitive impairment and memory problems. It's structurally similar to Piracetam and is thought to work in a similar way.

Regarding alcohol, Noopept is interesting because directly influences the NMDA receptor. This is the same receptor targeted by Acamprosate, a medication commonly used to treat alcoholism.

Noopept is a nootropic drug that has been shown to improve cognitive function and memory. It is structurally similar to Piracetam, and is thought to work in a similar way. Noopept also appears to have some anti-alcohol properties, as it targets the NMDA receptor, which is also targeted by Acamprosate, a medication commonly used to treat alcoholism.

Piracetam is a nootropic drug that has been shown to be effective in treating alcoholism when combined with chlormethiazole [6]Dencker, S J et al. “Piracetam and chlormethiazole in acute alcohol withdrawal: a controlled clinical trial.” The Journal of international medical research vol. 6,5 (1978): 395-400. … Learn more.

Piracetam works by improving communication between the left and right sides of the brain which leads to improved cognitive function.

As a result, Piracetam can help to reduce the symptoms of alcoholism and improve quality of life.

Overall, Piracetam is a promising nootropic for alcoholism. It can help to improve communication between the left and right sides of the brain, which leads to improved cognitive function.

In addition, Piracetam also targets the GABA receptors, which are important for reducing anxiety and stress. While there is limited evidence to support its efficacy, Piracetam may be worth trying for those struggling with alcoholism.

Aniracetam is a nootropic compound that has shown promise in treating addiction and cravings.

While the exact mechanism of action is not fully understood, it is thought to work by modulating the neurotransmitter systems that are involved in addiction and cravings.

For example, Aniracetam has been shown to increase dopamine and serotonin levels in the brain [8]Nakamura, K et al. “Site-specific activation of dopamine and serotonin transmission by aniracetam in the mesocorticolimbic pathway of rats.” Brain research vol. 897,1-2 (2001): 82-92. … Learn more, which are known to be involved in the reinforcing effects of drug abuse.

One study on rats found that Aniracetam could mitigate cognitive deficits caused by alcohol withdrawal [9]Vaglenova, J, and V Vesselinov Petkov. “Can nootropic drugs be effective against the impact of ethanol teratogenicity on cognitive performance?.” European neuropsychopharmacology : the journal of … Learn more. 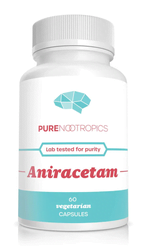 Aniracetam is a racetam. It's a promising nootropic for alcoholism and works by modulating the neurotransmitter systems that are involved in addiction and cravings. While there is limited data to support its efficacy, Aniracetam may be worth trying for those struggling with alcoholism.

L-theanine is a nootropic amino acid that is derived from tea leaves. It is structurally similar to glutamate, an important neurotransmitter in the brain.

L-theanine has been shown to promote relaxation without causing drowsiness, and it has also been shown to reduce anxiety, stress and cognitive impairments [10]Hidese, Shinsuke et al. “Effects of L-Theanine Administration on Stress-Related Symptoms and Cognitive Functions in Healthy Adults: A Randomized Controlled Trial.” Nutrients vol. 11,10 2362. 3 … Learn more. In addition, L-theanine has neuroprotective properties and can help to protect the brain from damage caused by substance abuse [11]Deb, Satarupa et al. “Neuroprotective attributes of L-theanine, a bioactive amino acid of tea, and its potential role in Parkinson's disease therapeutics.” Neurochemistry international vol. 129 … Learn more.

These studies suggest that L-theanine could be a helpful tool for people who are trying to overcome addiction. The supplement may help to reduce cravings and withdrawal symptoms, making it easier for people to stay on track with their quit attempts.

L-Theanine is one of the most common and safe nootropics available. It is effective in reducing anxiety, stress, and cognitive impairments. L-Theanine is also neuroprotective and can help reduce cravings and withdrawal symptoms in people trying to overcome addiction.

Oxidative stress, neuroinflammation, and dysregulation of glutamatergic neurotransmission are all believed to play a role in alcohol use disorder. Similarly, oxidative stress is known to contribute to Alcoholic liver disease (ALD).

N-acetyl cysteine (NAC) is an antioxidant with glutamatergic modulating and anti-inflammatory properties that has shown promise for treating alcohol use disorder in the presence of liver disease.

Preclinical and clinical studies have investigated the use of NAC to reduce alcohol consumption. NAC is low cost, well-tolerated, and could have promise for the treatment of alcohol use disorder in the presence of liver disease [13]Morley, Kirsten C et al. “N-acetyl cysteine in the treatment of alcohol use disorder in patients with liver disease: Rationale for further research.” Expert opinion on investigational drugs vol. … Learn more.

Overall, N-acetylcysteine is a promising nootropic for the treatment of alcohol use disorder. It is low-cost, well-tolerated, and has shown to reduce alcohol consumption. However, more research is needed to determine its effectiveness for all people.

Phenibut is a nootropic that is structurally similar to the neurotransmitter GABA. It was originally developed in Russia in the 1960s as a way to treat anxiety and stress.

In one study on animals under conditions of voluntary chronic alcoholism, the effect of Phenibut on locomotor activity and alcohol and food motivation was examined [14]Tiurenkov, I N et al. Eksperimental'naia i klinicheskaia farmakologiia vol. 68,3 (2005): 42-5..

Phenibut was shown to decrease the manifestations of alcohol-induced behavioral disorders and reduced alcohol motivation. This suggests that Phenibut may be useful in the treatment of alcoholism.

Overall, Phenibut is a promising nootropic for the treatment of alcoholism. It decreases manifestations of alcohol-induced behavioral disorders and reduces alcohol cravings. However, Phenibut can be hard to find and is not sold in stores.

Modafinil is a nootropic, or cognitive enhancer, that has been shown to be effective in treating narcolepsy, sleep apnea, and other sleep disorders.

It is also used off-label to treat ADHD, depression, and fatigue. In addition, Modafinil has been shown to have potential as a treatment for alcoholism. One study found that Modafinil helped reduce impulsivity and relapse and increased abstinence in patients with alcohol dependence [15]Schmaal, Lianne et al. “Effects of modafinil on neural correlates of response inhibition in alcohol-dependent patients.” Biological psychiatry vol. 73,3 (2013): 211-8. … Learn more.

This may help to reduce the reward associated with drinking, making it easier for people to abstain from alcohol. In addition, Modafinil has been shown to increase motivation, alertness, vigilance, and executive function, which may also help people stick to their sobriety goals [16]Walsh, James K et al. “Modafinil improves alertness, vigilance, and executive function during simulated night shifts.” Sleep vol. 27,3 (2004): 434-9. doi:10.1093/sleep/27.3.434.

Modafinil is a wakefulness-promoting agent with potential as a treatment for alcoholism. It has been shown to reduce impulsivity and relapse in patients with alcohol dependence and can help increase motivation, alertness, vigilance, and executive function.

What Are the Best Nootropics for Alcoholism?

Some of the best nootropics for alcoholism include:

Keep in mind that the list contains both natural and synthetic substances, so you'll need to consult with your doctor before taking any of them.

If you need a good place to start, I recommend Mind Lab Pro. It's a complete nootropic that can help reduce stress, anxiety, and impulsivity while increasing motivation, alertness, and executive function. Plus, it's all-natural and has no side effects.

How to Choose the Right Nootropic Supplement for Alcoholism?

Choosing the right nootropic supplement for alcoholism can be tricky. There are many different options out there, and it's important to find one that is right for you.

Here are a few things to keep in mind when choosing a nootropic supplement for alcoholism:

Once you've considered all of these factors, you'll be better positioned to choose the right nootropic supplement for your needs.

Remember that some of the nootropics on my list may interact with other medications (such as Acamprosate, Disulfiram, and Naltrexone). So, it's always a good idea to consult with your doctor before taking any of them.

What Are the Benefits of Nootropics for Alcoholism?

There is still much research to be done on the effectiveness of nootropics for alcoholism, but the early results are promising.

The benefits of nootropics for alcoholism are:

What Are the Side Effects of Nootropics for Alcoholism?

Nootropics for alcoholism can have several side effects, depending on the substance used.

Some nootropics can cause agitation, anxiety, and insomnia, while others can lead to headaches, nausea, and vomiting.

In some cases, nootropics can also interact with alcohol or other medications a person takes, leading to further side effects. Speaking with a doctor before taking nootropics for alcoholism is important to ensure they are safe for you and will not cause any adverse effects.

Do Nootropics Really Work for Alcoholism?

Yes, some nootropics work for alcoholism. However, there is limited scientific evidence to support the use of nootropics to treat alcoholism completely.

That being said, some research has shown that nootropics can help reduce alcohol cravings and prevent relapse.

Additionally, nootropics can help protect the brain from damage caused by alcohol abuse. Even though more research is needed, the evidence and data look promising.

So, do I recommend trying nootropics for alcoholism? Yes, I do.

There are many different types of nootropics out there, and each one can help in its own way. I recommend starting with Mind Lab Pro. It's a complete nootropic that can help reduce stress, anxiety, and impulsivity while increasing motivation, alertness, and executive function. Plus, it's all-natural and has no side effects.

If you're looking for something a little more targeted, I recommend N-acetylcysteine (NAC). It's a powerful antioxidant that can help to protect the brain from damage and also helps to reduce cravings.

No matter what nootropic you choose, always speak with your doctor first to ensure it's safe for you to take. And, be sure to start with a lower dose to see how your body reacts before increasing the dosage.