In this article, I'll look closely at the 8 best nootropics for neuroprotection. I'll also cover the potential risks and side effects you may run into and the benefits you can expect.

Are you concerned about cognitive decline as you age? If so, you're not alone.

But there is good news. Recent studies have also shown that certain nootropics may help to protect against the brain against age-related cognitive decline, so let's take a closer look at the 8 best nootropics for neuroprotection.

The best nootropics for neuroprotection, according to scientific evidence, are:

NooCube is a nootropic blend that contains some of the most well-known and effective cognitive enhancers, including Alpha-GPC, Huperzine A, Cat's claw, and Oat straw.

Alpha-GPC works by increasing levels of acetylcholine, a neurotransmitter that plays an important role in memory and learning. Acetylcholine is also known as the 'learning neurotransmitter' and is essential for healthy cognitive function.

As we age, our levels of acetylcholine tend to decrease, which can lead to age-related cognitive decline. This is one of the reasons why NooCube is so effective at protecting against cognitive decline and improving cognitive function.

NooCube also contains Huperzine A, an alkaloid that inhibits the breakdown of acetylcholine [3]Tang, X C et al. “Effect of huperzine A, a new cholinesterase inhibitor, on the central cholinergic system of the rat.” Journal of neuroscience research vol. 24,2 (1989): 276-85. … Learn more. By preventing the breakdown of acetylcholine, Huperzine A allows levels of this important neurotransmitter to remain higher for longer.

NooCube is an excellent choice for those looking for a nootropic supplement that can help protect against cognitive decline and improve cognitive function. The blend of effective nootropics, including Alpha-GPC and Huperzine A, work together to increase levels of acetylcholine and prevent its breakdown.

Alpha-GPC (L-alpha glycerylphosphorylcholine) is a natural cholinergic compound that is found in the brain. Cholinergic compounds are responsible for the production of acetylcholine, a neurotransmitter that plays an important role in memory and learning.

Choline is an essential nutrient for the body and is needed to synthesize acetylcholine. However, the body only produces small amounts of choline, so it needs to be obtained from the diet.

Alpha-GPC is one of the most bioavailable forms of choline and can cross the blood-brain barrier. It is considered one of the most effective nootropics for neuroprotection as it has been shown to increase neurogenesis and protect against neuronal death and cognitive impairment (Tang, X C et al.). 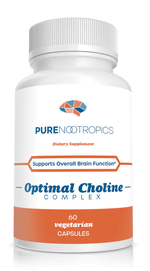 Alpha-GPC is an effective nootropic for neuroprotection as it increases neurogenesis and protects against neuronal death and cognitive impairment. It is a natural cholinergic compound that crosses the blood-brain barrier, making it one of the most bioavailable forms of choline.

Ginkgo Biloba is a herbal remedy that has been used for centuries to treat a variety of ailments. The Ginkgo tree leaves contain compounds that are thought to be responsible for its therapeutic effects.

Ginkgo Biloba is best known for its benefits on cognitive function and memory. It has been shown to improve blood circulation and increase oxygen uptake in the brain [4]Xu, Lili et al. “Effects of Ginkgo biloba extract on cerebral oxygen and glucose metabolism in elderly patients with pre-existing cerebral ischemia.” Complementary therapies in medicine vol. 23,2 … Learn more and to protect neurons from damage.

Ginkgo Biloba is also considered an adaptogen, meaning it can help the body to cope with stress and improve resistance to stress-related diseases. In a study with 31 stroke patients, supplementing with Ginkgo improved their recovery from the disease because it decreased oxidative stress and inflammation. 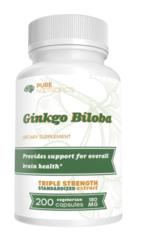 Ginkgo Biloba is a well-known herbal remedy that has been used for centuries to treat various ailments. It is best known for its benefits on cognitive function and memory, but it is also considered an adaptogen.

Ginkgo Biloba has been shown to improve blood circulation, increase oxygen uptake in the brain, and protect neurons from damage. It is also effective at reducing oxidative stress and inflammation.

The body has natural defenses, but these can be weakened over time due to inflammation and oxidative stress.

Glutathione is your body’s main line of defense against free radicals and helps repair cell damage.

Glutathione works through a few mechanisms:

These effects make N-Acetyl L-Cysteine a great choice for neuroprotection.

N-Acetyl L-Cysteine is a great choice for neuroprotection because it helps restore your body’s antioxidant glutathione levels. Glutathione is your body’s main line of defense against free radicals and helps repair cell damage.

Proanthocyanidins are a class of polyphenols that have been shown to have neuroprotective effects. They work by scavenging free radicals, reducing inflammation, and protecting neurons from damage [9]Chen, Hucheng et al. “Proanthocyanidins exert a neuroprotective effect via ROS/JNK signaling in MPTP‑induced Parkinson's disease models in vitro and in vivo.” Molecular medicine … Learn more.

Pine bark extract is a good choice if you're looking for a natural neuroprotective noot.

Pine bark extract is a good choice for neuroprotection because it is a natural source of proanthocyanidins, which are powerful antioxidants. Proanthocyanidins have been shown to scavenge free radicals, reduce inflammation, and protect neurons from damage.

Ashwagandha is an herb that has been used for centuries in Ayurvedic medicine. Ashwagandha has many benefits, including reducing anxiety and stress, improving memory and cognitive function, and reducing inflammation [10]Sikandan, Abudubari et al. “Ashwagandha root extract exerts anti‑inflammatory effects in HaCaT cells by inhibiting the MAPK/NF‑κB pathways and by regulating cytokines.” International journal … Learn more.

Ashwagandha is also an adaptogen that regulates cortisol levels and nourishes the adrenal glands. The herb works directly on our body's HPA axis (Hypothalamic-Pituitary-Adrenal axis), which controls how much stress you experience in life.

Ashwagandha is a good choice for neuroprotection because it helps reduce stress and inflammation. 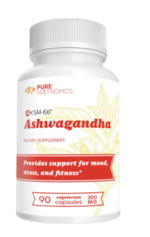 Ashwagandha is a great option for neuroprotection because it helps reduce stress and inflammation. Ashwagandha is also an adaptogen that regulates cortisol levels and nourishes the adrenal glands, which helps reduce the amount of stress you experience in life.

Rhodiola Rosea is an herb traditionally used for its neuroprotective effects. Studies have shown that it can help to protect the brain from damage caused by oxidative stress, inflammation, and excitotoxicity [11]Jacob, Reenu et al. “Neuroprotective effect of Rhodiola rosea Linn against MPTP induced cognitive impairment and oxidative stress.” Annals of neurosciences vol. 20,2 (2013): 47-51. … Learn more.

Rhodiola Rosea has also been shown to improve cognitive function and protect against age-related neurodegenerative diseases. The exact mechanism of action is not fully understood, but it is thought to work by modulating the levels of neurotransmitters and neurotrophic factors in the brain.

In addition, the presence of salidroside, rosavin, and p-tyrosol in Rhodiola Rosea are responsible for its antioxidant and anti-inflammatory properties [12]Nabavi, Seyed Fazel et al. “Rhodiola rosea L. and Alzheimer's Disease: From Farm to Pharmacy.” Phytotherapy research : PTR vol. 30,4 (2016): 532-9. doi:10.1002/ptr.5569. 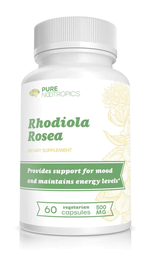 Rhodiola Rosea is a good choice for neuroprotection because it has been shown to protect the brain from damage, improve cognitive function, and help prevent age-related neurodegenerative diseases.

Saini, Neetu et al. have shown that Bacopa Monnieri can improve memory and cognitive function in both healthy adults and those with dementia.

One reason Bacopa Monnieri is effective for neuroprotection is that it helps reduce oxidative stress and inflammation in the brain through compounds like bacosides. 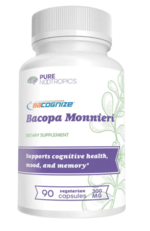 Bacopa Monnieri is a good choice for neuroprotection because it can improve memory and cognitive function, reduce oxidative stress and inflammation, and protect cells from damage.

What Are the Best Nootropics for Neuroprotection?

The best nootropics for neuroprotection are:

Each of these nootropics has been shown to be effective for neuroprotection in studies.

NooCube is, in my opinion, the best nootropic for neuroprotection because it is a powerful and well-rounded supplement that can help to improve cognitive function, protect the brain from damage, and reduce oxidative stress.

It contains ingredients that work together to support cognitive function and protect the brain. It's also 100% natural and non-GMO.

How to Choose the Right Nootropic Supplement for Neuroprotection?

Choosing the right nootropic supplement for neuroprotection can be tricky because there are so many different products on the market.

Here are a few things to consider when choosing a neuroprotection supplement:

Another thing to keep in mind is whether you want to stack multiple nootropics together or take a single supplement that contains all the ingredients you need.

If you stack multiple nootropics, it's important to be aware of any interaction risks. And, if you take a single supplement, be sure to check the dosage of each ingredient to avoid taking too much of any one thing.

What Are the Benefits of Nootropics for Neuroprotection?

The benefits of nootropics for neuroprotection include:

Most nootropics have multiple benefits for neuroprotection, which is why they are such effective supplements for this purpose.

Nootropics can help improve cognitive function by increasing blood flow to the brain, providing the brain with nutrients, and protecting neurons from damage.

They can also reduce oxidative stress and inflammation, contributing to cognitive decline.

What Are the Side Effects of Nootropics for Neuroprotection?

The side effects of nootropics for neuroprotection are usually mild and may include:

These side effects are typically only experienced when taking high doses of nootropics or if you are sensitive to the ingredients.

If you experience any severe side effects, stop taking the supplement and speak to a doctor. Generally, nootropics are safe and well-tolerated by most people.

Do Nootropics Really Work for Neuroprotection?

The nootropics featured here have been shown to be effective in studies, and many people report positive results when taking them.

If you are looking for a way to improve cognitive function, protect your brain from damage, and reduce oxidative stress, then nootropics may be an excellent choice for you.

Do I recommend Nootropics for Neuroprotection? Yes, absolutely!

Nootropics are a powerful and well-rounded way to improve cognitive function, protect the brain from damage, and reduce oxidative stress.

If you are looking for a neuroprotection supplement, I recommend NooCube because it contains ingredients that are backed by science, and it is 100% natural and non-GMO.

I also recommend that you stack multiple nootropics together to get the most benefit for neuroprotection. Just be sure to check for any potential interactions between the supplements you take.