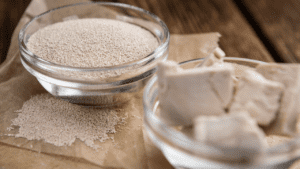 It’s been a while since we have seen any new nootropic developments.

This is what makes the recent discovery of functional yeast extract so exciting.

In this article, I’m going to introduce you to a new type of nootropic that has been gaining popularity recently among students and professionals alike – functional yeast extract.

We will look at what functional yeast extract is, its potential benefits, and how to take it. So without further ado, let’s get started!

What is Functional Yeast Extract?

Yeast extract is commonly used in foods as a flavor enhancer and food additive.

Yeast extract is a liquid or powdery form of yeast. Yeast extract can be found in a variety of foods including crackers, gravy, and frozen meals.

Saccharomyces cerevisiae is a strain of yeast that has been used in the production of bread, beer, and winemaking for thousands of years. It was discovered by dipping grape skins into wine.

B Vitamins have been implicated in the breakdown of carbohydrates, proteins, and fats into usable energy. Vitamin B12 has been observed to improve mood in several studies.

Beta-glucans are sugars that may be found in the cell walls of yeasts, fungus, bacteria, algae, and other plants.

Beta-glucans have been used for health benefits on occasion.

The primary advantage of yeast extract is the presence of beta-glucans.

What are Beta Glucans?

As briefly mentioned above, beta-glucans are sugars that may be found in the cell walls of yeasts, fungus, bacteria, algae, and other plants.

Beta-glucan is a soluble fiber known as “yeast polysaccharide.”

Yeast extract contains up to 50% beta-glucans by weight! That’s an incredible amount.

Beta-glucan is a type of polysaccharide that has been associated with the maintenance and improvement of overall immune function in humans, but it can benefit your brain as well!

When you take it as a Nootropic supplement, the beta-glucans in yeast extract may enhance cognition by stimulating neuron growth and protecting neurons.

What are the benefits of yeast extract?

The benefits of yeast extract are often attributed to the presence of beta-glucans.

Beta-glucan is known for its anti-viral and anti-bacterial properties, but it also has a number of cognitive benefits as well!

In addition to improving your immune system and supporting cardiovascular health, beta-glucan may enhance cognition by stimulating neuron growth and protecting neurons in the brain.

The abundance of beta-glucans in yeast extract may also enhance overall cognitive function, improving memory and focus in healthy individuals.

How do I take yeast extract?

While you can find yeast extracts in a variety of foods, the best way to obtain them is through supplementation.

If you are interested in taking functional yeast extract as a supplement, make sure that it contains at least 50% beta-glucans by weight!

This ensures that your dosage will be potent and effective.

If you’d like to try functional yeast extract as a nootropic, I recommend taking between 250mg-500mg daily with food!

This is the standard dose used in studies on this supplement so far.

Remember that all supplements should be taken responsibly and if you have any questions about how to take functional yeast extract as a supplement, consult your doctor.

What foods should I avoid?

If you are taking yeast extract as a supplement, make sure that you do not eat any food containing yeast!

Yeast is naturally high in beta-glucans and it may cancel out the effects of supplementation.

Yeast extract supplements typically come with this warning, but keep an eye on your diet to make sure you don’t eat any food with yeast in it!

What else should I know?

There is not much known about the long-term effects of supplementation on human subjects, but there are some concerns that have been raised.

Supplements containing beta-glucans may increase blood sugar levels and interact with diabetes medications or insulin in some cases.

You should also be aware that yeast extract may affect how other medications and supplements are metabolized.

Can I stack Functional Yeast with other Nootropics?

As long as you avoid food that contains yeast, then stacking functional yeast extract with other nootropics is perfectly fine!

Functional yeast extract can provide a variety of cognitive benefits and it may enhance the effects of other supplements.

You should also be aware that there are some reports indicating beta-glucans in functional yeasts could interact with MAO-inhibitors and thyroid medications.

The effects of yeast extract may also be enhanced by stacking it with other nootropic supplements such as L-theanine and Lion’s mane mushroom.

What are the side effects of yeast extract?

While there is not much known about the safety and long-term efficacy of supplementation, some studies have indicated that beta-glucans may interact with certain medications.

Additionally, yeast extract supplements could increase the risk of bleeding when taken in conjunction with blood thinners like warfarin or aspirin.

However, there is not much known about these interactions at this time!

It’s still recommended that anyone taking medications seek the advice of their doctor before beginning supplementation.

So how do I get my hands on Functional Yeast Extract?

If you are interested in trying functional yeast extract as a nootropic, then your best bet is to purchase it online!

While this supplement isn’t available at most brick and mortar stores yet, you can find it online (Nootropicsdepot for instance.)

If you are interested in trying this nootropic, then make sure to purchase it from reputable suppliers that clearly list the number of beta-glucans present in each dose.

Keep an eye out for supplements containing high concentrations of beta-glucans by weight to ensure you are getting a potent dosage!

In summary, functional yeast extract provides a variety of cognitive benefits and it is particularly effective at improving memory!

It may also enhance the effects of other nootropics or supplements you take to further boost your brainpower.

However, there are some concerns about its long-term efficacy as well as interactions with medications that should be considered before supplementation.

It’s also important to note that functional yeast extract is not available in local stores, so you’ll need to purchase it online if you want this nootropic!

Make sure the supplier lists the number of beta-glucans present in each dose and always consult with your doctor before starting supplementation.