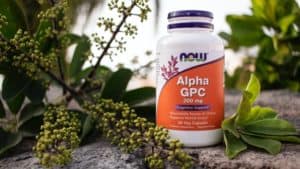 In recent years, choline has become popular for its role in helping to break down the neurotransmitter acetylcholine associated with cognition. It’s therefore unsurprising that the popularity of choline supplements has increased substantially.

A primary form of choline is called L-Bitartrate (sometimes marketed as Alpha GPC), which is a pretty advanced form of supplementation.

This article will help you understand what benefits it provides, and what risks are associated with taking this supplement.

What is choline bitartrate used for?

The primary purpose for which it is used is to improve memory and cognitive function. Since most believe that choline aids the removal of acetylcholine from your brain, this can help you become more efficient at, and better at, retaining information.

How does it work?

Choline is a component in two molecules called phosphatidylcholines (lecithin) and sphingomyelin (a type of fatty acid). These are found in the membrane of cells throughout the body.

Choline is also involved in cell communication by acting as a signal transducer for nerve stimulation.

The brain uses choline as an important substrate for synthesizing acetylcholine, a chemical that plays an important role in learning, memory, and cognition. This is why choline is sometimes referred to as “brain food.”

When you take a choline supplement, it has the same effects as if you ate more foods containing lecithin or phosphatidylcholine. These are naturally found in foods such as eggs, beef, chicken, and whole grains.

What kind of benefits does choline provide?

Choline has the ability to act as a neurotransmitter, meaning that it can be used by the body to transmit signals between neurons (brain cells). These signals play a large role in the brain’s ability to process information, which is why choline supplements are popular for treating conditions like Alzheimer’s and ADHD/ADD.

Some forms of choline (such as Alpha GPC) are able to work alongside acetylcholine, which allows them to enhance its effects.

This works by increasing the brain’s ability to utilize acetylcholine and improve cognitive processes.

Does it have side effects?

Side effects from supplements like this are usually dose-related, which means that the more you take, the more likely you are to experience a potentially negative effect.

Some of these include nausea, diarrhea, and abdominal pain if taken on an empty stomach. Other side effects include difficulty sleeping, headaches, and nervousness.

If you experience any of these side effects while taking choline supplements, stop taking them immediately and consult a

Which forms of choline are the best?

There are several different forms of choline, and you should choose one that has proven effects. Alpha GPC (L-Bitartrate) is often used in dietary supplements as it is the most common form used.

It can be found in many skincare products (such as creams or shampoos), but also in over-the-counter drugs for various conditions like migraine headaches.

Alpha GPC is completely natural and has been scientifically researched to prove its effectiveness. It works by releasing acetylcholine more quickly into your bloodstream, which can improve cognitive performance and memory.

It’s also been shown to improve levels of dopamine, a neurotransmitter associated with elevated mood and feelings of

How do you take choline bitartrate?

Always follow the dosage recommendations that come with your choline supplement.

A common dose of Alpha GPC (L-Bitartrate) is 500 mg per day, but this may vary depending on the manufacturer’s instructions.

You can take this supplement in either solid or liquid form. However, it’s best to avoid taking more than the recommended amount (as this could cause possible side effects).

If you experience any of these side effects, stop taking the supplement immediately and consult a doctor.

Is choline bitartrate the same as choline?

Choline bitartrate is not the same as choline in its raw form. In fact, choline is an essential nutrient that can be found in foods like eggs, fish, and beef.

You can also get it from the following sources: cauliflower, broccoli, tomatoes, potatoes, cabbage and soybeans (to name a few).

Choline itself is not a dietary supplement. It’s simply a nutrient found in many foods. It’s also present in your body naturally and plays an important role in many of your body’s processes.

It’s imperative to get enough choline to provide your cells with necessary nutrients that can help optimize their function.

What is the best form of choline and where can I get it?

The best form of choline is Alpha GPC (L-Bitartrate). It’s been proven to have positive effects on cognitive performance, mood, and memory.

Other forms of choline include Acetyl-L-Carnitine and CDP Choline. However, they haven’t been shown to work as well as Alpha GPC (L-Bitartrate), so you should stay away from them.

Choline bitartrate can be purchased online from the most reputable supplement retailers. Try to search for a product that’s made in the USA and has a money-back guarantee.

You can also find choline bitartrate in some over-the-counter drugs sold at most drug stores like Walgreens or a Pharmacy. These are typically used for conditions such as chronic fatigue syndrome or dementia (to name a few).

However, they are not intended to be taken daily, so you should always buy them with caution.

A quick recap of choline bitartrate

The best form of choline is Alpha GPC (L-Bitartrate).

It originates from the B vitamin family.

It’s used to improve your memory and brain function.

Choline bitartrate can be purchased online from the most reputable supplement retailers. Try to search for a product that’s made in the USA and has a money-back guarantee.

Using Alpha GPC (L-Bitartrate) is one of the best ways to help your brain function and improve your memory.

There are various health benefits that it provides, which include: improved mood, focus, memory, and concentration.

However, most people don’t know about it or how to use it properly. So you have to be careful when using Alpha GPC (L-Bitartrate).

When it comes to improving memory, there’s absolutely nothing better. This is because it was scientifically proven to increase acetylcholine levels and improve the communication between your neurons.

But if you take too much, then you can experience some side effects such as insomnia, nausea, vomiting, and headache.

So you should take Alpha GPC (L-Bitartrate) in moderation and use it with extreme caution.