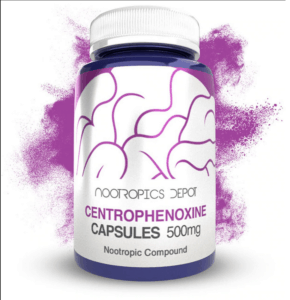 
Here’s what we will be covering today:

What is Centrophenoxine & How Does It Work?

First, let's take a closer look at what Centrophenoxine, or meclofenoxate, is and how it works mechanistically.

The popular smart drug is one of the original nootropics. It was first developed in France back in 1959.

Centrophenoxine is a combination of DMAE (dimethylethanolamine) and Parachlorphenoxyacetic acid.

As many of you might know DMAE is a choline molecule naturally produced in small amounts in our brains.

One of the most popular hypothesis put forward by researchers is that DMAE may increase acetylcholine levels in the brain.

One of the reason why this would make sense is because DMAE is known to inhibit the choline metabolism in peripheral tissues in the body.

When you prevent the use of choline by other tissues in your body, an increased level of choline (from DMAE) can be measured in the bloodstream.

A popular approach to enhance the bioavailability of choline would be to combine DMAE with pCPA (Parachlorphenoxyacetic acid).

The aforementioned pCPA is an auxin which basically means that it's a plant growth hormone (a natural growth factor in plants).

The moment your body digests Centrophenoxine, it will start to break down into both DMAE and pCPA in your liver. It's this particular combination of DMAE and pCPA that enhances the bioavailability of DMAE in the body.

So to summarize, here are the benefits and how Centrophenoxine helps:

If you're looking for a potent nootropic stack Centrophenoxine may do the trick. It will increase your brain energy levels by boosting oxygen flow as well as detoxing free radicals and cellular waste that accumulates as we age thus improving cognition and memory.

How Do You Take Centrophenoxine & For How Long?

The right dose of Centrophenoxine, and how to take it, varies alot. It mainly depends on if we're talking about Centrophenoxine in pill or powder form as well as the goal/intention behind taking it in the first place.

If we go by the guidelines found on Examine.com we can see that a therapeutic dose of Centrophenoxine, in pill form, is considered to be 3-6 doses of 250mg.

This specific range should be used if you are looking to reduse lipofuscin.

Lipofuscin, as I briefly mentioned in the beginning of this article, is one of the aging or "wear-and-tear" pigments, found in the liver, kidney and heart muscle.

If you are a younger biohacker looking to boost your brain for productivity purposes and/or neurological protection, then it's well-established that 1-3 doses of 250mg is relatively safe and should suffice.

How long does it take for the effects of Centrophenoxine to work you might ask?

Usually when you take it on an empty stomach the effects can take from 30 to 60 minutes before you can feel a difference.

Your weight is also a part of the equation when it comes to how quickly it kicks in as well as if you ingest Centrophenoxine in powder or capsule form.

If you're wondering for how long you should take centrophenoxine as a supplement then there are no set guidelines.

Centrophenoxine has been used as a nootropic for almost 60 years and has studies establishing its safety profile. According to the studies it's clear that it's a non-toxic smart drug and is relatively safe for most people.

That being said, you can easily cycling in and out with 4 days using it followed by a break for 3 days.

So in terms of how much centrophenoxine is safe to take, and for how long, really comes down to your goals and preferences since it's a relatively safe smart drug with low potential side-effects.

How Does Centrophenoxine Feel & What To Expect?

If you're just starting to do some research on Centrophenoxine, you've probably been wondering what it feels like when the effects start to kick in.

From my own experience Centrophenoxine gives me a slight energy boost at first. The same kind of energy and alertness I get when I drink a cup of coffee in the morning (but without making me jittery).

I find it much easier to remember and recall little things during the day which is a huge plus for me personally.

I have tried stacking Centrophenoxine with different racetams, Piracetam and Aniracetam particularly, which I have had mixed results with and not something I necessarily would recommend.

I usually take a dose in the morning and another dose during the afternoon which gives me a nice steady energy boost throughout the day.

It's important to note that this is just my own personal experience with Centrophenoxine.

You might get a completely different effect from it which is why I always recommend to start out slowly when you take a new Nootropic.

You can always increase the dose as you get used to the effects and/or potential side-effects.

Where Do You Buy Centrophenoxine?

One of the easiest ways to buy Centrophenoxine, whether you're living in the US or Europe, is just simply by ordering online.

However, it can be a confusion process since there are so many nootropic vendors. That's why it's critical to do some due diligence before buying.

One of the things you need to be aware of is the quality of the product. I have heard countless of stories about people ordering Centrophenoxine from a sketchy website receiving a tainted product.

So please make sure that the vendor you're buying from is well-established in the industry with a lot of positive reviews from fellow biohackers.

Since Centrophenoxine is a non-prescription smart drug, and is relatively safe, you're free to order as much as you want.

If you're thinking about buying in bulk it's worth noting that in some instances you'll be able to get a decent discount on your order if you reach out to the customer service.

I buy my Centrophenoxine from nootropicsdepot.com and is the only company I have experience with. They offer quality products for a reasonable price.

Their customer service is spot on and what I like about the company is that they keep you in the loop when it comes to your package.

The only downside to Nootropicsdepot is that the delivery time varies. Usually I get my packages anywhere from 7 to 12 business days. 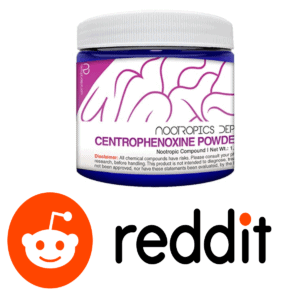 This section of the article will feature the most relevant personal Centrophenoxine experiences (good and bad) available on Reddit.

My hope is that this section will act as a complete resource for anyone looking for reviews/feedback on Centrophenoxine from fellow biohackers on Reddit before they buy.

Reddit User U/noouser talks about Centrophenoxine and its effect on Anxiety:

The Reddit User Noouser notices a big improvement in anxiety and derealisation. He started taking centrophenoxine in powder form 2 weeks prior to posting on Reddit.

Reason behind taking centrophenoxine was due to a physical ailment and completely unrelated to cognitive enhancement (he didn't even realize that it was a Nootropic).

He has suffered from anxiety and derealisation for over 20 years. He says the following:

"Feel like I'm looking at the world through a thick plate of glass, can't feel subtle emotions"

Noouser suffered from psychotic panic attacks triggered by smoking Weed in his teens. He has experience with 5-HTP, GABA, dietary changes, cognitive therapy, Linden Method etc (but without any success).

After 5 days of consuming Centrophenoxine Noouser notices that he is able to think properly for the first time in 20 years:

"I was able to have a thought, and have it regulate my emotions in an appropriate way."

Noouser feels robust again, able to deal with the ups and downs of life and 2 weeks in his anxiety is almost completely gone.

He takes pure Centrophenoxine 1.8 grams on average per day to be precisely.

He finishes his thread by saying that no other supplement has radically impacted his anxiety and derealisation to the same extend.

Reddit User U/MexicanCarbs talks about how he feels depressed on it:

The Reddit User MexicanCarbs has been taking Piracetam for months but states that he has just recently started using a Choline Source (Choline Bitartrate).

After 30 days of Piracetam MexicanCarbs starts taking Centrophenoxine. He reports an increased feeling of depression taking 250mg of Centropenoxine a day.

MexicanCarbs has also noticed how he falls asleep afterwards everytime he takes it (which is interesting since Centrophenoxine should be stimulating).

He goes on to say the following:

"I can feel it working the first 30 mins, a bit over stimulating, then I'll just crash and feel sleepy."

MexicanCarbs decides to skip the Centrophenoxine and only consume Piracetam with no choline source.

He finishes off by saying that he will revisit Centrophenoxine, though taking a smaller 125mg dosage and see how it works out.