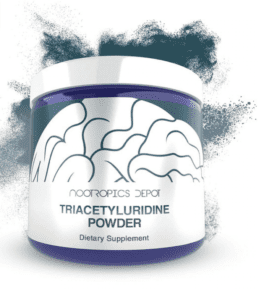 Triacetyluridine, or TAU, is a nootropic that converts to Uridine in the body. It’s proven to help alleviate the symptoms of depression by increasing dopamine levels in the brain.

If you’ve just recently come across Triacetyluridine you might have been wondering what exactly this relatively popular Nootropic is, what it does and if it has any potential side effects/benefits?

In this article I will take a closer look at the following topics:

… So without further ado, let’s just jump straight to it, shall we?

What Is Triacetyluridine & How Does It Work?

As briefly mentioned in the beginning Triacetyluridine converts to Uridine in the body. Uridine is just one of the five standard nucleosides. The other four are;

When Triacetyluridine converts to Uridine Triphosphate in the body it can deliver up to 6 time as much uridine than just consuming uridine alone.

Uridine is a precursor of ribonucleic acid which supports healthy functioning of the central nervous system.

It’s worth noting that Triacetyluridine received an FDA approval in 2015.

Triacetyluridine is found to activate the P2Y2 receptors in the brain. This study shows that the P2Y2R plays a neuroprotective role during inflammation in the CNS.

The reason why people are using Triacetyluridine as a Nootrpic is because it enhances functioning in synaptic connections and improves mitochondrial functioning.

What Are The Benefits And Side Effects?

The data on potential benefits and side effects when taking Triacetyluridine is well documented.

From the studies I could find about Triacetyluridine here’s what they show:

In terms of side effects I couldn’t really find any conclusive evidence since Triacetyluridine is generally well-tolerated.

The reason being that Triacetyluridine converts to Uridine in the body. Uridine is found in breast milk and is natural compound produced in humans.

This is why the side effects are rare. However, I did find some cases where people have taken high doses and reported vomiting, nausea, and diarrhea.

From what I could find on various forums people take anywhere from 25 mg to 100 mg of Triacetyluridine.

Triacetyluridine comes in both powder form and capsules. 1 capsule is 25 mg.

Some people report that even 12mg of Triacetyluridine is sufficient when stacked with racetams such as;

As is the case with most Nootropics, it’s always a good idea to start off with a low dose to access its effects on your body/mental health.

If it’s your first time trying Triacetyluridine I wouldn’t recommend stacking it with other Nootropics either until you’re 100% certain that it doesn’t have any negative side effects.

There isn’t too much of a difference between Triacetyluridine and uridine monophosphate.

That being said Triacetyluridine is more potent and has a higher bioavailable when it comes to Uridine compared to Uridine Monophosphate.

Both supplements have the same effects and can take anywhere from 1 to 3 hours to kick in. 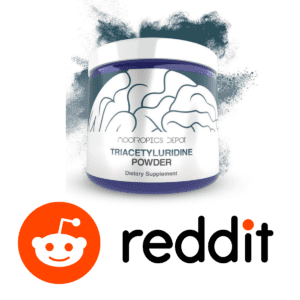 The first thread on Reddit I could find is from a user called; u/utsukushii_rei.

Utsukushii says that he just recently bought Triacetyluridine and has been getting really great results but is curious to know if stacking it with anti-depressants is a bad idea.

He then goes on to say that after taking Triacetyluridine his memory is much sharper and his mood has improved quite a bit.

He then finishes off by asking the following question:

“My question is would combining my daily anti depressants be a bad idea?”

Triacetyluridin, when converted in the body, has a direct impact on serotonin and dopamine (so would make sense why he is asking this question.)

Utsukushii doesn’t get any definitive answer from people in the thead, so I’ll try to answer it here:

A good rule of thumb is to NEVER combine nootropics with SSRI’s unless your doctor says otherwise. Do NOT play around with your brain chemistry.

Triacetyluridine vs UMP – Which One Is Better?

Another thread I found on Reddit is from a user called; u/jt2424.

He’s starting out by asking which one is better; Triacetyluridine or Uridine Monophosphate?

He then goes on to say that he only has tried Triacetyluridine (he takes 25-50mg) which seems to make his mood better and more social.

A user called; FrigoCoder, is then replying saying that he prefers Triacetyluridine because the benefits are immediate and more noticeable.

FrigoCoder then goes on to say the following:

” I do not think I have ever benefited from Uridine Monophosphate. “

The last thread I could find, and an interesting one, is from a user called; U/srubek.

Interesting enough he is talking about Triacetyluridine and smoking.

He starts off by saying how he never though that he would quit smoking. He goes on to say the following:

“I was ruining my lungs and I was having so much trouble breathing. I had tried everything.”

He then came across Triacetyluridine.

He took 25mg/day every morning and noticed how he could bear working with only 1 cigarette break.

The then states the following:

He then goes on to say that people from work have made comments about his skin quality (asking what he did).

The thread is extremely detailed so if you’re thinking about quitting smoking I can highly recommend reading the entire thread here (U/srubek is going into much more details).

Where Can I Buy Triacetyluridine?

You can find Triacetyluridine on most Nootropic websites. TAU is sold in both powder form and capsules.

I only buy from one vendor which is called; NootropicsDepot. The reason being they lab test their products to ensure high quality and purity.

They also have a lot of reviews from verified buyers which is always a good thing.

They also have 25mg capsules – you can find them right here.

The only downside I have experienced buying from NootropicsDepot is the delivery time.

I live in Europe and it usually takes anywhere from 8 to 13 business days for my package to arrive. Keep that in mind if you’re in a hurry.

That being said I’m sure you can find a quicker shipping method at checkout.

Triacetyluridine is converted to Uridine in the body.

It is used as a nootropic because it boosts cognition and supports healthy functioning of the central nervous system.

People who take it are experiencing better mood and an overall sense of well-being.

A high dose is considered to be 100mg.

Triacetyluridine seems to be safe with low side effects.

It can be bought in both powder form and capsules on most nootropics websites.

Triacetyluridine is very similar to uridine monophosphate but is more potent and kicks in faster.

Lastly, some people use TAU to quit smoking.